Get in touch with us with great recipes that you wanna share. Inform us about stories happening in your community.Thank you – dank je!

Be the first to find out.

They start to appear in May or June, and they are literally at every street corner stand and market. The way of eating it is also a real Dutch tradition. If you want to get real authentic when eating this, lift a herring by its tail, dip it in the raw onion, hold it above your head, then throw your neck back and lower it into your mouth.

Of course, you can also enjoy this Dutch delight by eating it in little pieces or on a sandwich called ‘broodje haring’. 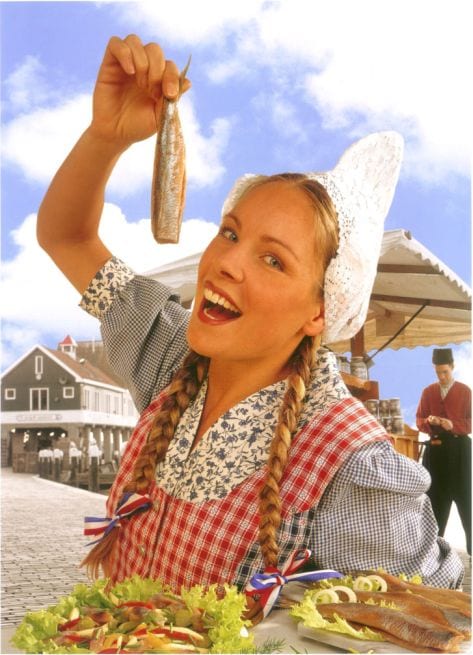 On ‘Vlaggetjesdag’, the first barrel of new herring caught that year is sold to the highest bidder and from then on these new herring are sold all over the country. These ‘Hollandse Nieuwe’, or maatjesharing, officially are caught only within a couple of weeks from around the beginning of May until June, when the first young herring of the season have grown nice and fat (‘maatje’ comes from the Dutch word ‘maagd’, meaning virgin, which refers to the fact that the herring are caught before they start spawning in July). No wonder so many people look forward to Flag Day!

Everyone is excited to get their hands on this relatively exclusive new catch in order to test and judge the quality of the fish of that year. 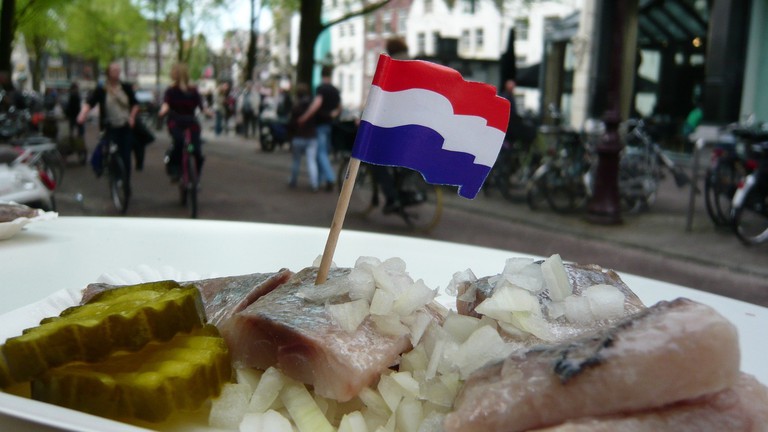 The manner in which the herring are processed – a traditional Dutch way – is quite interesting. After the herring are caught, the gills and part of the guts are removed from the fish in a process called gibbing (kaken in Dutch). However, the pancreas is left inside the fish during the salt-curing process, because it releases enzymes essential for the flavour and texture of the fish and these leftover guts are only removed right before consuming the fish. After gibbing, the fish are cured in a wooden barrel with salt so that they’re available all year round. In the past, the whole process of gibbing and barrel-curing was immediately done on the fishing boats in order to prevent the fish from rotting prematurely during the long travel back home.

These days, however, it’s mandatory by Dutch law for the herring to be frozen somewhere during the process of preparing soused herring, in order to kill any potential parasites present in the fish, … so don’t worry about catching anything nasty.

It isn’t just The Netherlands that loves its fish this way; Scandinavia, too, is big on having it pickled, brined and soused, but we‘ll focus on the Dutch version of pickled herrings – both are very similar to anyone but the most patriotic of a-fish-iondos.

Eat this hot or cold.

Add everything except the fish into a medium-sized saucepan and bring to the boil. Add the herring to the pan, cover, and simmer on a low heat for 12-14 minutes, then remove from heat.

Allow cooking liquor to cool to a manageable temperature, then either drain and serve the fish warm, or add the fish to a kilner jar and top up with the liquor, onions, herbs and spices – adding a little extra white wine vinegar (2 tablespoons) for piquancy. Eat within 2 days.

Pannenkoeken - The Staple Of Local Cuisine In The Netherlands
November 12, 2020

Spice Up Your Life With Speculaas (Windmill) Cookies
November 12, 2020